What is Sweetest Day?

What is Sweetest Day and why do we celebrate it?

I’ll admit it, I had never heard of Sweetest Day until Pamela told me about it when I started working at the flower shop! It’s not on my calendar of things to remember, and it’s probably not on yours, either. But since that time I’ve met many people who celebrate Sweetest Day, so I thought I’d do a little bit of research and figure it out! Here’s what I’ve learned.

From Wikipedia:  “Sweetest Day is a holiday celebrated in the  Midwestern United States and parts of the Northeastern United States  on the third Saturday in October.  It is a day to share romantic deeds or expressions. 11 states and parts of two states observe Sweetest Day: Illinois, Indiana, Kentucky, Michigan, Minnesota, Missouri, North Dakota, Ohio South Dakota, Wisconsin and West Virginia, along with areas of Pennsylvania and New York.

“There were also several attempts to start a “Sweetest Day” in New York City, including a declaration of a Candy Day throughout the United States by candy manufacturers on October 8, 1922. In 1927, The New York Times reported that “the powers that determine the nomenclature of the weeks of October” decreed that the week beginning on October 10, 1927 would be known as Sweetest Week. On September 25, 1937, The New York Times reported under Advertising News and Notes that The National Confectioners Association had launched a “movement throughout the candy industry” to rank Sweetest Day with the nationally accepted Mother’s Day, Father’s Day, and St. Valentine’s Day. In 1940, another Sweetest Day was proclaimed on October 19. The promotional event was marked by the distribution of more than 10,000 boxes of candy by the Sweetest Day Committee. The candy was distributed among 26 local charities. 225 children were given candy in the chapel at the Society for Prevention of Cruelty to Children on October 17, 1940. 600 boxes of candy were also delivered to the presidents of the Jewish, Protestant and Catholic Big Sister groups of New York.”

Hence a Sweet holiday was born!

Whether or not it was originally intended to be a day of candy is up for grabs, but over the years it has become a great day to remind a very special someone that she’s Sweet (pun intended!).

So, think about it! You can remind your sweetheart that she’s still Number One in your book with a dozen red roses and a box of chocolates! 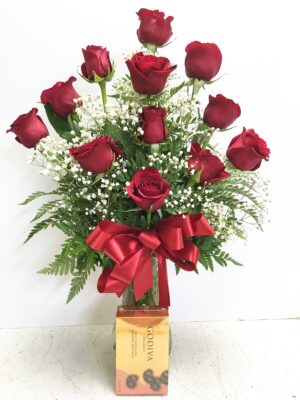 Call, Click or Come by!!  Let us help you tell your sweetie how sweet she is!