Are You Gluten Free?

Are you Gluten Free?

C’mon, you know who you are!

I’ll admit it, I didn’t really know what it is to be Gluten Free. Gee, I didn’t even know what Gluten is until my friend Meli  introduced me to the concept. So I did what my daughter Lauren is always telling me to do: I googled it!   Here’s what I found:

In August 2013, the Food and Drug Administration issued a final rule that defined what characteristics a food has to have to bear a label that proclaims it “gluten-free.” The rule also holds foods labeled “without gluten,” “free of gluten,” and “no gluten” to the same standard.

Manufacturers had one year to bring their labels into compliance. As of August 5, 2014, any food product bearing a gluten-free claim labeled on or after this date must meet the rule’s requirements.

This rule was welcomed by advocates for people with celiac disease, who face potentially life-threatening illnesses if they eat the gluten found in breads, cakes, cereals, pastas and many other foods.

Andrea Levario, executive director of the American Celiac Disease Alliance, notes that there is no cure for celiac disease and the only way to manage the disease is dietary—not eating gluten. Without a standardized definition of “gluten-free,” these consumers could never really be sure if their body would tolerate a food with that label, she adds.

As one of the criteria for using the claim “gluten-free,” FDA set a gluten limit of less than 20 ppm (parts per million) in foods that carry this label. This is the lowest level that can be consistently detected in foods using valid scientific analytical tools. Also, most people with celiac disease can tolerate foods with very small amounts of gluten. This level is consistent with those set by other countries and international bodies that set food safety standards.

Gluten is a mixture of proteins that occur naturally in wheat, rye, barley and crossbreeds of these grains.

As many as 3 million people in the United States have celiac disease. It occurs when the body’s natural defense system reacts to gluten by attacking the lining of the small intestine. Without a healthy intestinal lining, the body cannot absorb the nutrients it needs. Delayed growth and nutrient deficiencies can result and may lead to conditions such as anemia (a lower than normal number of red blood cells) and osteoporosis, a disease in which bones become fragile and more likely to break. Other serious health problems may include diabetes, autoimmune thyroid disease and intestinal cancers.

Before the rule there were no federal standards or definitions for the food industry to use in labeling products “gluten-free.” An estimated 5 percent of foods formerly labeled “gluten-free” contained 20 ppm or more of gluten.

How Does FDA Define ‘Gluten-Free’?

In addition to limiting the unavoidable presence of gluten to less than 20 ppm, FDA now allows manufacturers to label a food “gluten-free” if the food does not contain any of the following:

Foods such as bottled spring water, fruits and vegetables, and eggs can also be labeled “gluten-free” if they inherently don’t have any gluten.

Under the final rule, a food label that bears the claim “gluten-free,” as well as the claims “free of gluten,” “without gluten,” and “no gluten,” but fails to meet the requirements of the rule is considered misbranded and subject to regulatory action by FDA.

According to Felicia Billingslea, director of FDA’s division of food labeling and standards, consumers should know that some foods labeled “gluten free” that are in the marketplace may have been labeled before the rule’s compliance date of August 5.

Some of these foods, like pasta, have a longer shelf life and may legally remain on the shelves a little bit longer. Therefore, it is possible that stores may still be selling some foods that are labeled “gluten-free” produced before the compliance date of the final rule.

If consumers have any doubts about a product’s ingredients and whether or not the product is gluten-free, they should contact the manufacturer or check its website for more information.

What About in Restaurants?

Billingslea suggests that consumers who are concerned about gluten-free claims in restaurants ask the following questions when ordering foods described as gluten-free:

“With the new FDA gluten-free regulations now being enforced, restaurants will be well-served to ensure they are meeting the FDA-defined claim,” said Joy Dubost, Ph.D., R.D., Senior Director of Nutrition, National Restaurant Association. “We will continue to work with restaurant operators and chefs to assist and ensure a favorable dining experience for consumers.”

This article appears on FDA’s Consumer Updates page, which features the latest on all FDA-regulated products.

What does all of this have to do with gift baskets, you ask? Well, I will tell you!

I can design and deliver Gluten Free Gift Baskets at your request! Yes, I have a local farmer’s market and store that specialize in gluten free products, and with a couple days’ notice I can have your custom designed and delivered for you! 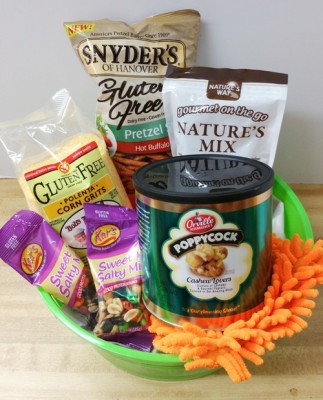